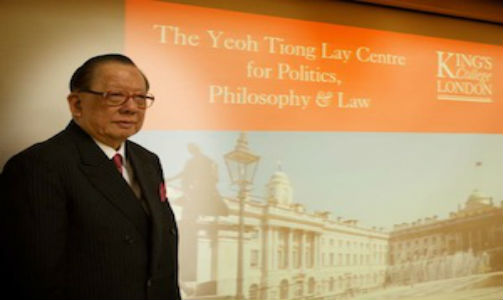 King’s College London has received a donation of £7 million to set up a new research-based Centre for Politics, Philosophy & Law. The gift, from the family of Malaysian alumnus Mark Yeoh, will further build King’s reputation as a dynamic international centre for legal teaching and research in the heart of London.

The Centre will be named the Yeoh Tiong Lay Centre for Politics, Philosophy & Law in honour of the Yeoh family. It will be based in The Dickson Poon School of Law at King’s, which recently moved into Somerset House East Wing – an iconic building in central London, located at the centre of the British legal and political world and surrounded by major global law firms. 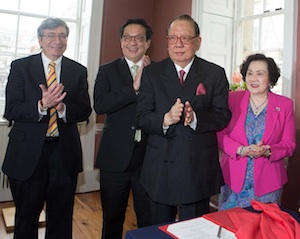 The donation will provide for three new academic posts and 16 Yeoh Tiong Lay LLM scholarships. The research findings of the Yeoh Tiong Lay Centre will underpin the teachings of King’s new PPL degree. Launched in 2012, the Politics, Philosophy & Law (PPL) LLB is a unique programme that allows students to fulfil the requirements of a qualifying law degree while being able to choose from a range of modules in philosophy and political economy.

The gift from the Yeoh family follows a £20 million donation to the School of Law last year by Mr Dickson Poon CBE, which is part of an overall £40 million transformation project aiming to build the School’s reputation as one of the world’s leading law schools and set new standards in legal education and research.

The degree, not currently offered anywhere else in the UK, is designed to equip students with an interdisciplinary education that will prepare them for working in an increasingly globalised environment. The nature of the programme provides access to eminent academics from three outstanding faculties and gives students the chance to consider a wide range of career options through King’s connections and links with London’s global community.

Mark Yeoh graduated from King’s College London with an LLB (Hons) in 1987. He is currently Director of Wessex Water Ltd, which is owned by the Yeoh family’s YTL Corporation – one of Malaysia's largest companies with interests in construction, utilities, hotels, property development and technology. 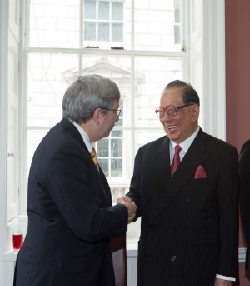 He said: ‘As a King’s College London alumnus, I am proud to be part of the Yeoh Tiong Lay Centre for Politics, Philosophy & Law at The Dickson Poon School of Law. I remember fondly my days at King’s and am delighted at the prospect of being able to contribute towards assisting others in their educational goals. The new degree is pushing boundaries in the study of law and I am ecstatic that the Yeoh family is able to bring to fruition its passion for higher education and learning.’

Francis Yeoh, representing the Yeoh family at a reception this morning at King’s, said: ‘My family is delighted to be able to make a gift to create the Yeoh Tiong Lay Centre for Politics, Philosophy & Law in the Dickson Poon School of Law at King’s College London. The Yeoh Tiong Lay Centre will play a leading role in investigating large ethical and moral questions about which tomorrow’s lawyers must be knowledgeable.

‘The new Politics, Philosophy & Law degree will offer students an interesting combination of topics to study.  We are delighted by the impressive ambitions that King’s has for its School of Law, and are excited by the chance to contribute to this innovative project.’

The Rt Hon Sir John Major KG CH, former British Prime Minister and Chairman of the College’s World questions | King’s answers fundraising campaign, said: ‘I am enormously grateful for the Yeoh family’s generous gift to King’s College London, and for the creation of the Yeoh Tiong Lay Centre for Politics Philosophy & Law. This is a vital project towards realising the ambitions of The Dickson Poon School of Law, and reflects the Yeoh family’s passion for excellence in higher education.’

Professor Sir Richard Trainor Principal & President of King’s College London said: ‘This gift is fantastic for King’s and The Dickson Poon School of Law. We are hugely honoured and grateful to the Yeoh family for their generosity and vision in creating this new Centre, where we hope to attract the brightest and best legal scholars from all over the world.

‘This is a wonderful time in the history of King’s, with The Dickson Poon School of Law now housed in this iconic building in central London. Today we can celebrate this gift as another very significant step in the progress that the School is making towards achieving its aim of being one of the world's leading law schools.’

At its heart, the The Yeoh Tiong Lay Centre will focus on law and its strength will be drawn from King’s expertise in the Schools of Social Science & Public Policy, Arts & Humanities and Biomedical Sciences. It will allow investigation into fields such as medical ethics; power; wealth; human values and vulnerabilities in a world of high, middle and low income economies; transnational personal and collective responsibility, interaction and accountabilities.

The research findings of the Centre will inform the teaching of undergraduates who enrol on the PPL degree and equip them with skills that are highly sought after by employers worldwide.