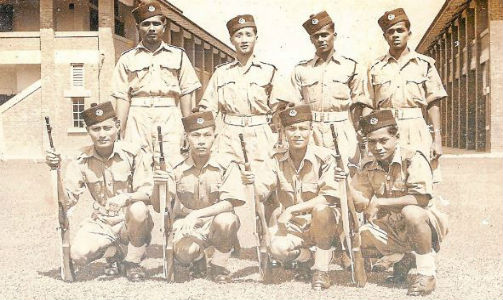 How about combining good old quotas with trendy KPIs for a different effect? MY dad was a police officer. During the Emergency, he was the Special Branch officer in the communist-infested area of Labis and Segamat, Johor. He was a handsome young man but lonely as he was shunned by the local Chinese for being a “running dog”.

Every day, he ate dinner in different places and varied his routine because he was a target for assassination. Despite the difficulties, he risked his life protecting this country and served 33 years until he retired with the rank of assistant commissioner. Why am I telling you this? Because it makes me angry whenever I am told the Chinese are not interested in joining the police force.

My dad was not alone. There were plenty of Chinese (and Indian) officers. I remember his two close friends: Uncle Jerry Liew who was the CID deputy chief and Uncle Seenivasagam who was also in Special Branch and an exemplary officer until his untimely death of a heart attack in his 40s. After the New Economic Policy was introduced in 1971, slowly but surely, the number of non-Malays dwindled. Now, the police force is a near solid block of Malays. Overall, the Royal Malaysia Police has kept law and order.

But something is not quite right in a country that boasts of being multiracial (“Malaysia, truly Asia” – remember?), yet important public entities like the police, the army and the civil service are almost exclusively of one race. Where the police and army are concerned, the excuse cited ad nauseum is that the Chinese aren’t interested because they are culturally averse to such dangerous work and prefer better paying jobs. If that were true, how the heck did China and Taiwan build up their armies and police force?

Former National Civics Bureau director-general Datuk Shagul Hamid Abdullah, in a January 2010 article in The Star, claimed “there has never been any deliberate and conscious effort to discourage the non-Malays from entering and staying in public service”. He also cited the Federal Constitution that stipulates that job opportunities and promotions in the public service should be awarded fairly to all deserving Malaysians. Yes, well, while there is no formal policy for the Government to employ only Malays at the expense of the non-Malays, writer and socio-political commentator A.B. Sulaiman believes there are “covert and informal policies” doing just that. “Career advancement has been a problem for the non-Malays since the 70s and early 80s, i.e. the period of the NEP. I’d say that this period saw the birth of the “Malaysation” programme of the political leadership, later known by the label “Ketuanan Melayu”. “This era saw the marginalising of non-Malays in government employment,” wrote Sulaiman in a 2010 comment.

While Malays are fed the notion that the Chinese won’t risk their lives for their country, the truth is: why would the Chinese risk their lives signing up for jobs with practically no prospects in an organisation that discriminates against them? But if people are inspired, believe they can contribute and be recognised, they will sign up. Pemandu, a multiracial government outfit, is a clear example of that. I know of many non-Malays who gave up high paying jobs to serve under Datuk Seri Idris Jala. There are also some progressive ministries like International Trade and Industry whose secretary-general is Eurasian and a woman, Datuk Dr Rebecca Sta Maria. These, sadly, are the exceptions.

The mono-ethnic situation, as Sulaiman puts it, “is the direct result of the preferential treatment given to Malays in government recruitment”. Undoubtedly, the NEP was crafted with good intentions – one of its key aims was socio-economic restructuring to eliminate the identification of race with economic function. To achieve that, quotas were used as part of this affirmative action. Well, folks, it’s 2013, and it’s about time “preferential treatment” gets new treatment. According to the Department of Statistics, Malaysian citizens are made up of 67.4% bumiputera, 24.6% Chinese, 7.3% Indians and 0.7% others. So, if the police and civil service are now lopsided with over 90% being Malay, then let’s correct it using our tried and tested method of quotas. Thanks to Jala and Pemandu, ministers and civil servants have KPIs. Let’s add one more: a quota to bring in non-Malays into their workforce.

Instead of merely paying lip service and lamenting that the Chinese are not interested, the IGP and his directors, the chief secretary to the government and his heads of departments must fill their quotas of 25% Chinese and 7% Indians in their recruitment drives and promotion lists. In a public lecture in Kuala Lumpur in June 2009, University of Manchester’s vice-president for equality and diversity, Prof Dr Aneez Esmail shared that Britain’s 1976 Race Relations Act had not solved the issue of racism because it did not take into account “institutional racism”. What this means is an organisation through its procedures can behave in a racist way that can deny certain people their rights or opportunities. Once this was recognised, a 2001 amendment to the Race Relations Act made it mandatory for British public bodies to promote racial equality. Where the university was concerned, it had a problem of gender inequality. Dr Aneez said while there were more women lecturers than men, only 20% of professors were women. Why so few?

“The frequent answer is, they don’t apply for these positions,” said Dr Aneez. Sounds familiar? To solve this, the university told faculty heads that their requests for promotions would be rejected if there were not enough deserving, qualified women on their lists. Those heads then went out of their way to identify and help qualified women lecturers to present their case for promotion. If 40 years ago, the Malaysian private sector was overwhelmingly Chinese and to correct that imbalance, companies had to dutifully fulfil Malay quotas in equity and hiring practices, then it’s time the public sector did the same to correct its own racial imbalance. If those tasked to do this don’t fulfil this KPI, then no salary increments or promotions for them. It’s as simple as that. To the new post-GE13 Government, please be true to our Federal Constitution and dust off that old chestnut and inject it with new meaning: leadership by example.

> The writer is proud her dad served as a pallbearer at the funeral of Deputy Prime Minister Tun Dr Ismail Abdul Rahman in 1973. The phone call came before dawn and the whole family set to polishing Dad’s boots and the brass buttons of his uniform. Feedback: junewong@thestar.com.my