House of the Rising Sun

There's something magical about Niseko Village, Japan's premier ski paradise which attracts domestic and international travellers by the droves. As the snows fall on the slopes, the skiing cognoscenti head for the allure of Niseko's tailored trails, snowpacks, naturally formed halfpipes and white forest glades. In winter, every climb and descent on Mount Niseko-Annupuri (1,308 metres) offers stunning views of the dormant neighbouring volcano Mount Yotei, Hokkaido's equivalent of Mount Fuji.

The greater Niseko United area – of which Niseko Village is a part – boasts 2,191 acres of skiable terrain. Here, some of the lightest and driest snow in the world can be found, originating from snow clouds transported by the Eurasian continent's seasonal winds and warm currents off the Sea of Japan.

At the base of Mount Niseko-Annupuri lies new luxury accommodation. Named Hinode Hills in homage to the rising sun ('hinode' means 'sunrise'), this 79-room hotel has been configured to offer direct ski-in and -out access to Niseko Village's famed trails. The property is strategically located adjacent to the Upper Village gondola, providing guests with easy lift access around the mountainside. Hinode Hills realises the Japanese wabi-sabi philosophy in aesthetics, where one discovers an organic beauty in imperfections and the wisdom of nature. The result is an elegant setting that is contemporary yet retains an authentic Japanese charm.

It's luxurious rooms come in five variants - deluxe, studio and one-, two- or three-bedroom suites – all providing picturesque views of the beautiful Niseko countryside. Room sizes range from the 38-square-metre deluxe room to a sprawling 148-square-metre three-bedroom suite. Each bedroom has its own en-suite bathroom. Suites include living, dining and kitchen spaces for guests looking for a home away from home, complete with a dishwasher, washing machine and tumble dryer. All rooms are also equipped with high-speed wireless internet, high definition TV and Bluetooth music speakers.

At Hinode Hills, the wide range of on-site amenities includes an in-house onsen, restaurant, lobby lounge with feature fireplace, car park and complimentary scheduled shuttle transfers to Hirafu and Kutchan. For a fee, overnight ski and snowboard waxing services, in-room physiotherapy and child-minding services can be provided. For those partial to cooking, Hinode Hills can provide a fully stocked kitchen throughout your stay. Should you like to venture beyond Niseko Village, the 24-hour concierge will assist with ground arrangements and sightseeing tours. 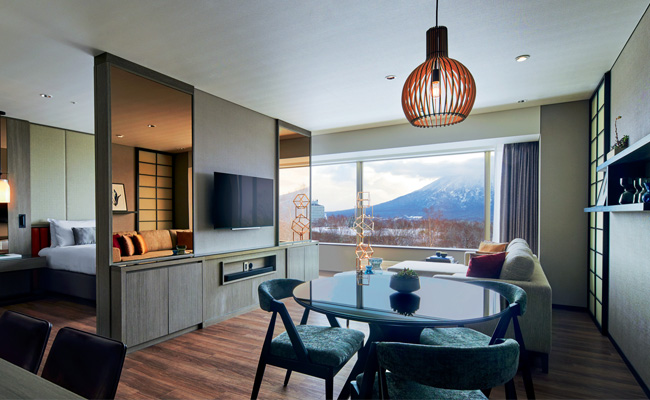 There's much to do at Niseko Village. First-timers and those needing a refresher in all things ski- and snowboard-related may head to Niseko Village Snow School for private lessons. The little ones aren't left out either with the Niseko Kids Snow School tailored to provide daycare and ski lessons to children aged one to six.

Niseko Village is part of Niseko United – a veritable wonderland of four interlinked resorts. This skiing mecca is spread out across 48 kilometres of groomed slopes, 70 runs, 29 lifts and gondolas, 11 gates to the backcountry and an additional 30 square kilometres of unofficially marked terrain.

Niseko Village's carved trails cater to beginner, intermediate and advanced skiers and snowboarders, all directly accessible from Hinode Hills. Beginners are able to ski on certain bends and inclinations named after staple Japanese foods: the short 250m Jagaimo (potato) decline, the 500m Konbu (edible kelp) tilt at the top, and the longer yet gentler 850m Misoshiru (miso soup) gradient. Advanced skiers in turn will find a 650m deep plunge that is Namara (Hokkaido dialect for 'extreme') and the cheekily named 250m Don't Blink dip to get the adrenaline pumping.

While skiing may take up a majority of your winter vacation in Niseko Village, Hinode Hills' concierge can arrange for equally stimulating alternatives. Explore the pristine mountain on a fast-paced snowmobile tour or subscribe to a more laidback view on the back seat of a snow raft. You may also opt to be whisked across the shimmering snow on a reindeer-led sled or embark on a guided snowshoe tour.

For après-ski relaxation, take a cue from the Japanese and head to the hotel onsen to let the warm mineral-rich waters rejuvenate your aching muscles. Guests of Hinode Hills may also avail themselves of the onsen at neighbouring Hilton Niseko Village and The Green Leaf Niseko Village, both with their respective charms. The Hilton's is the more modern of the two, with two bathing areas: an indoor bath on the upper level and a spacious outdoor bath. The Green Leaf's, on the other hand, is more traditional, set against boulders and pine trees covered by snow. In a nation with approximately 30,000 onsen, there's plenty to explore, with a tour of famous local hot springs via scheduled shuttle bus transfers originating from The Green Leaf from December to March.

For a more hands-on experience, there's Wakka Spa at the Hilton, which has achieved a top 10 placing among spas in Japan. The spa's name is derived from the native Ainu language meaning 'water' and specialises in relaxing therapies and massages as well as beauty and facial treatments. The beauty of Hinode Hills is that guests may cross-sign and charge therapies and their meals at either The Green Leaf or Hilton in Niseko Village to their own accounts. 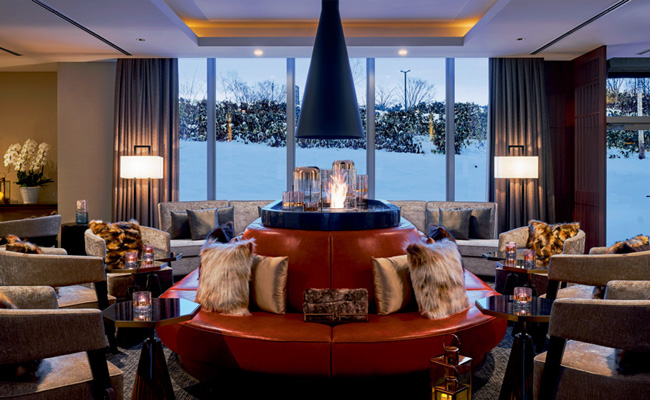 Hokkaido's famed produce and ingredients take centre stage at the village – a collection of restaurants, bars and designer boutiques which forms the social nexus of this destination. Dine on the freshest seafood at The Crab Shack, named for its prominent marketplace display and restaurant vibe which imitates a Hokkaido boathouse. Here, grilled or steamed Japanese snow crabs and juicy scallops from nearby waters are served alongside the local delicacy – jingisukan (Gengkhis Khan) – a grilled lamb dish with meat so fresh you eat it rare, with an array of vegetables and a dipping sauce of soy, fruits and garlic.

Another must-try Hokkaido speciality is soup curry – a hearty broth of herbs and spices cooked with meat and  vegetables. At Two Sticks, the village's modern izakaya, this local staple receives a sub-continental twist, with Indian spices infused into a mixture of local potatoes, eggplant, peppers, pumpkin, mizuna leaf and egg in the creation of its tandoori chicken soup curry.

Miso ramen – which originated from the island of Hokkaido and is now famous the world over – and yakitori skewers, paired with a glass of hot sake, are also fantastic options. Yang Shu Ten, a casual family restaurant serving classic Japanese fare, is your best bet for all things sushi, sashimi, tempura and teppanyaki. Multi-course meals are a speciality here, giving you a culinary snapshot of produce from the local terroir.

Retail therapy is also available in the form of Boot Solutions and Otaru Taisho Glass Palace. The former sells an extensive range of ski- and snowboard-related merchandise, and also offers custom boot-fitting, premium rental packages and winter footwear. The latter is equipped with intricate glassworks that hail from the nearby port city of Otaru, which turned to mastering glassware after the herring industry declined in the 1950s.

For a dose of local art, two destinations – The Green Leaf Niseko Village and Hilton Niseko Village – provide creative insight. Sapporo-based artist Emi Shiratori's hand-drawn graphic murals, inspired from the natural beauty of the region, grace the rooms and public spaces of The Green Leaf. At the Hilton, the Hokkaido Art Gallery in the lobby displays uniquely designed products from local skilled craftsmen, supported with art events throughout the year.

Honeymoon Escapes: This New Rural Resort (Plus Floating Spa) in England Is On An...

House of the Rising Sun

The Powers That Be