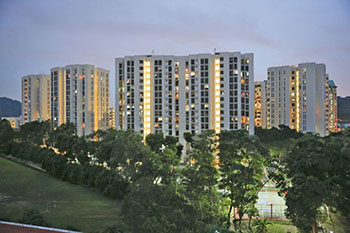 A collective sales committee has been formed at Cashew Heights condominium (above) in Upper Bukit Timah Road, while Royalville in Bukit Timah Road is up for sale at $368 million.ST PHOTO: ONG WEE JIN

The collective sale fever rages on, with another estate ready to chance its arm while freehold Royalville condominium in plush Bukit Timah hit the market yesterday.

The new candidate is the Cashew Heights condominium in Upper Bukit Timah Road, whose owners formed a sales committee, albeit on their third try.

The 999-year leasehold development, which has 596 apartments and three shops on a sprawling 953,000 sq ft site, garnered about 62 per cent of votes in support of the formation of a committee on Oct 7. It will hold an extraordinary general meeting next month to select a marketing agent and a lawyer.

"Our built-up plot ratio is estimated to be 1.16, but our allowed plot ratio is 2.1. There is potential for maximisation of land usage for the developer," said Mr David Wong, vice-chairman of the Cashew Heights collective sales committee.

Dr Lee Nai Jia, head of research at Edmund Tie & Company, noted that there is an "upcoming site at Hillview Rise under the Government Land Sales programme, which may divert developers' interest".

Meanwhile, district 10's Royalville in Bukit Timah Road was launched yesterday with an asking price of $368 million, reflecting a land rate of $1,509 per sq ft per plot ratio. No development charge is payable. The tender closes on Nov 10.

Built in the 1980s, Royalville has 93 units and 11 shops. The 174,176 sq ft site has a gross plot ratio of 1.4 so it can accommodate a project of up to 323 units. Ms Swee Shou Fern, senior director, investment advisory at Edmund Tie, the estate's marketing agent, said: "There has not been any freehold site of this size available for sale at Bukit Timah in the last 10 years."

Its attributes include a good location, coveted freehold tenure and proximity to Sixth Avenue MRT station. "It's a very nice site, and the total quantum can be easily taken up by many developers," said Mr Tan Hong Boon, regional director at JLL.

He noted that there have been more larger deals concluded this year compared with previous cycles, with the average transaction size hitting $365 million. "That's the highest since the process began in 1994, with the exception of the one deal done in 2015 - Thong Sia Building - at $380 million," he said.

Mr Alan Cheong, senior director of research and consultancy at Savills, said: "There are hundreds of owners becoming instant millionaires every month, thanks to collective sales. With interest rates on the rise, many of them may downgrade to the HDB market to get homes of the size they are used to. Resale HDB prices may well start to move up."