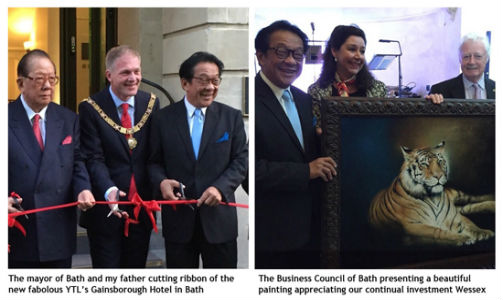 You can't fake heritage. And you certainly can't fake 2000 years of spa history. People have been seeking rest and rejuvenation in the thermal spring waters of Bath since Roman times. From the weary centurions who credited the gods for the water's steaming heat, via the genteel Georgians who flocked to Bath for socialising in the 17th-century, to the pitch-battered Wallabies, whose Rugby World Cup 2015 Team Base is the University of Bath, the city's spa credentials are second to none.

Which makes it all the more surprising that it's taken until 2015 for a hotel to capitalise on this liquid USP. The Gainsborough Bath Spa, which opened in July, is not only a grandly elegant refurbishment of two 18th-century Grade II listed buildings (both former hospitals), it's the only hotel in the city boasting direct access to Bath's mineral-rich thermal water. It fills the pools in the hotel's Spa Village, bubbling up straight from one of the city's three hot springs. Across the road, the general public may be queuing for access to the popular Thermae Bath Spa complex, but Gainsborough guests can wander down for a dip in their towelling robe and slippers.

As for heritage, how about a hoard of   more than 17,000 Roman coins dating from 32 BC, excavated by archaeologists in the hotel's foundations? Or a 4th-century Roman mosaic in the basement? You can see some of the coins in the hotel's foyer. The mosaic, sadly, is preserved, for its own safety, under an exact replica in the spa. You might not be able to see it, but you know that it's there, a reminder of just how many thousands of years of spa history reside in this place.

Spa-ing is taken very seriously at the Gainsborough. The ritual starts with the creation of a pouch of aromatherapy oil scented salts, bespoke for each guest. Choosing your oils from an apothecary-like counter of glass bottles, you then carry your infused pouch with you around the spa circuit, sniffing it as you go. Therapeutic? The aromas of ylang ylang and jasmine certainly smelt lovely as I wandered from sauna to steam room to pool.

I wasn't quite so convinced by the next step in the process, writing my spa "intention" on a Roman-esque wax tablet. Perhaps a spa step too far – and no, I'm not telling you what I wrote.

What cannot be faulted are the pools themselves. In a word, magnificent. Guests are encouraged to take the Bath House Circuit, moving between two smaller thermal pools, sauna, steam room and ice alcove, before floating in the main atrium pool.

I could have floated all day. The thermal waters, which emerge from the ground at 47C before being cooled down to around 35C, have a mineral-induced buoyancy that's perfect for relaxation.  It's a wonderful space to zone out in, filled with natural daylight that floods through the glass ceiling, and the warm buttery tones of the original 18th-century Bath limestone walls.

In fact, I had the most unusual moment of my spa-reviewing career in the pool. The Freedom treatment is one of three aquatic body therapies offered in the spa (therapists from the nearby Royal Mineral Hospital also bring patients to the pool for sessions), and – if you're prepared to push your spa boundaries a little – it's unforgettable. Your therapist is in the pool with you, holding you in the water and moving you through a series of stretches. All you need to do is shut your eyes and trust your body to their hands. I was swirled in all directions, at times fully submerged, and it felt remarkable. How often do we truly let go and allow someone else to have physical control? When the 45-minute session was over, I was calm to the point of feeling sedated. Quite the strangest sensation.

The most exclusive spa experience on offer is a private one. Two Spa Village guest rooms and one suite boast the thermal water directly from the bath taps. No need to even leave your room to feel restorative benefits, just run yourself a bath.

Of course a five-star hotel – with prices to match – has to have more than just UNESCO World Heritage waters on tap. You aren't, after all, going to spend your entire stay in your bathers. The Gainsborough has pulled off a tricky hospitality act; it's formal without being stuffy, luxurious without being ostentatious.

Aesthetically, everything is the best of the best. The 99 bedrooms, with their lofty proportions and period details, are classic and chic, but not fusty. Many's the five-star hotel that overdoes the chintz, but not here. A palette of Georgian-inspired blues and greys, keeps the mood elegant and understated, while flashes of brass and gold accessories – the fashionable metals of the moment – add a modern edge.

It's the same in the dining room, where chef Johann Lafer (the Jamie Oliver of his native Germany), serves locally sourced food that champions his "dining without borders" philosophy: the menus blend British and Asian dishes, in a nod to the Gainsborough's Malaysian owners, the YTL hotel group. It's a formal dining room, complete with an impressively grand black-marble fireplace, but it doesn't feel starched and stuffy, as can so often be the case in a hotel of this calibre. At the heart of this unbuttoned approach to luxury, is the service – it's impeccable. Staff can make or break a hotel experience, and at The Gainsborough, they are as much a part of the hotel's essence as the spring waters in its spa. Attentive but not obsequious, friendly but not fawning, they give the place the hum of well-managed hospitality that every great hotel possesses. And many many don't. It's impressive.

A final special mention to head barman Joel Saint John. This man knows his way around a cocktail list, and he'll transfix you with his passion for cutting edge blends. You have been warned.

Bath may have waited a long time for a spa hotel, but The Gainsborough has been worth it. It gives this city's heritage and magic the grand spa experience it deserves. I think the centurions would have approved.

The writer was a guest of The Gainsborough Bath Spa