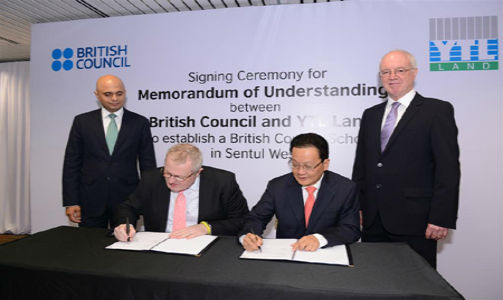 Today British Secretary of State for Business, Innovation & Skills Sajid Javid MP announced plans for the establishment of a British Council School in Kuala Lumpur. The plans were announced as part of the launch of a Year of Education between the UK and Malaysia in 2016.

The Secretary of State is visiting Malaysia as part of the British Prime Minister’s official delegation to several South Asian countries. He used his time in Kuala Lumpur to visit the British Council offices and speak to students and staff. He announced that 2016 would be a year of celebration of the strong education relationships between the United Kingdom and Malaysia.

He also witnessed the signing of a memorandum of understanding between the British Council and property development company YTL Land & Development Berhad, to develop plans to establish a new international school in Sentul West in Kuala Lumpur.

The British Council has operated in Malaysia since 1947, offering educational and cultural links and exchanges with the United Kingdom, and acting as a major player in the teaching and learning of English. 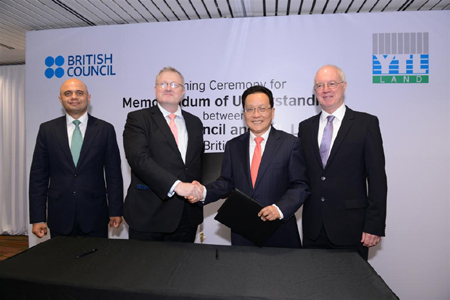 The British Council currently runs one school in Madrid, Spain, offering a bilingual and bicultural education to Spanish nationals. The school recently received the top mark of ‘outstanding’ in all aspects of education from the UK school standards body Ofstedthat reports on the quality of education in British schools. The new school in Kuala Lumpur would offer the same outstanding quality of education, aimed at Malaysian nationals, with an emphasis on multilingual and multicultural learning.
British Council Malaysia Director Gavin Anderson said:

“This is an incredibly exciting step forward for us. We are well known across Malaysia for the quality of our English teaching, and our broader role in bringing the education worlds of Malaysia and the UK together. Our school will take that work onto a new level, while helping to develop the next generation of Malaysian global citizens and leaders.”

YTL Land has been pioneering lifestyles in Malaysia for many years, leveraging on the diverse expertise and experience of its parent company, YTL Corporation Berhad. With a clear focus in designing for specific markets, YTL Land has enjoyed an illustrious track record by creating some of Malaysia’s most unique landmarks. It has carved out its own niche as a reputable and innovative property developer by setting bold trends and delivering innovative concepts and design in all its properties.

“We are honoured to be associated with the British Council, a leading global institution, in developing their first international school in Kuala Lumpur.  We share the British Council’s aspiration to create a first class educational environment within the new international school in Sentul West, as this will complement our Sentul West and Sentul East Master Plan very well. This new initiative is also in line with our philosophy and long term vision for the urban rejuvenation of Sentul which capitalizes on strategic opportunities to create living environments that are sustainable, engaging and inviting for our growing young urban population.''