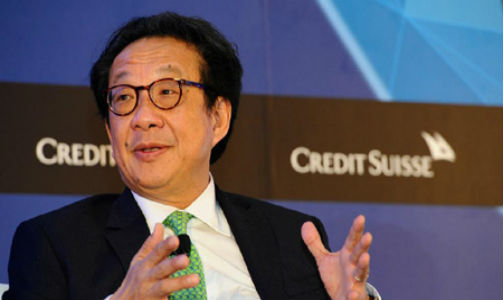 In the first of a two-part series, Sarah Yap reports on the Credit Suisse Global Megatrends Conference 2015 in Singapore, which brought globally renowned business and thought leaders to Sentosa Cove.

For the third consecutive year, financial services company Credit Suisse brought together globally renowned businesses and thought leaders to share their views on major theories that will shape investment markets over the next 12 to 18 months.

More than 370 delegates as well as leaders in the business, academia and economic research fields attended the Global Megatrends Conference held W Singapore at Sentosa Cove on Tuesday.

This year's conference focused on a few major topics Investing in the Changing World, New Equilibrium for Oil, Outlook for 2015, Urbanising Asia: Potential in Developing Cities and The Pursuit of Sustainability.

Mr fink who founded BlackRock in 1988 and turned the company into the biggest asset manager in the world with US$4.8 trillion (S$6.5 trillion) of assets under management, is one of the investment world's most respected figures. His views are often thought as a barometer of the state of the global economy.

He kicked off the conference by sharing his thoughts on the current state of the global economy and longer-term trends that are shaping the future. He singled out technological innovations as the main game-changer in not just business but much of the world.

"I believe that the greatest megatrend, more than quantitative-easing, what's changing the world very rapidly is technology, which is driving every industry and changing it," he said.

Mr Eric Varvel, Chairman, Asia Pacific and the Middle East, Credit Suisse, then gave an overview of the trends that he sees happening in the region that he oversees. The six events that he identified are:

1. the setting up if the Asian Infrastructure Investment Bank;

4. the growth of the Chinese middle class;

5. Chinese social networking companies such as Tencent and Renren; and

6. the determination of the Chinese government to root out corruption.

The last is also the most important development that he sees in the region.

"This will provide social stability, boost confidence and dramatically increase the willingness of entrepreneurs and investors to take risks and build businesses," he said.

Against what can only be viewed as a positive backdrop, Mr Glen Keating, head of Research for Private Banking & Wealth Management and deputy global chief investment officer, Credit Suisse, discussed his main "megatrend": a multipolar world, demographics and sustainability.

The first refers to the increasing importance of emerging markets as their growth has been outpacing the expansion of advanced economies. Wealth is therefore being transferred from the developed to the developing world. The second refers to ageing in the rich countries and population surges elsewhere, especially in Asia where the average age of many countries are pretty low.

These two factors in turn conspire to put pressure on sustainability, he said.

"Despite lower cell prices, the whole climate change debate has absolutely not gone away," he said. "I think in some sense it has almost intensified as it gets combined with the issue of energy security."

In other words, the sustainability megatrend is absolutely not dead, as it includes energy and other key areas such as water," he added.

In fact, sustainability is at the heart of what businesses should strive to do or the world will simply cease to exist, said Tan Sri Dr Francis Yeoh, managing director, YTL Group of Companies. Companies need to stop being in "self-denial" and use technology to find solutions to environmental problems, he said, while commending the efforts of some countries in Asia including the two most populous in the region.

"Asian economies are getting there," he said. "Singapore does a good job, Japan and Korea are also quite strong in the area.

"China and India are the biggest polluters, and they know that if they don't do anything about it, we are not going to have a very pleasant world for our children to live in," he said.

Tan Sri Dr Yeoh believes that technology is the solutions for much of the world's sustainability problems.

"There are enough solutions to solve the world's pollution, even today. So why can't we do it?" he said.