Farmers get a taste of food waste from GENeco, a YTL Wessex Water subsidiary 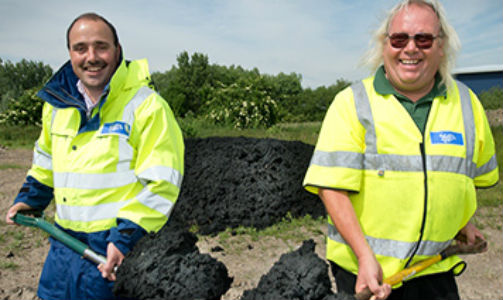 Farmers from across the South West were among the first visitors to be given a tour in YTL’s Wessex Water new food waste recycling and renewable energy facility in Bristol this week.

The facility, which is based at Bristol sewage treatment works in Avonmouth, is operated by Wessex Water through its wholly owned subsidiary company GENeco and transforms 40,000t per year of household and supermarket waste into useful by-products, such as nutrient-rich fertiliser and renewable energy.

The fertiliser is produced through anaerobic digestion - a process in which bugs break down biodegradable material to produce methane gas.
Each year GENeco recycle around 240,000 tonnes of this nutrient-rich fertiliser to farmers across the region.

Around 40 farmers who benefit from using the fertiliser from the facility invited to tour the site to find out more about how it is produced.
Their visit coincided with Recycle Week, a national annual event designed to encourage people to recycle even more than ever before.

This year the event is celebrating its 10th anniversary with a ‘home and away’ theme which focuses on recycling a number of every day items, including food waste.
Neil Sims, a biosolid recycling controller, who helped organise the tour, said staff at GENeco had been inundated with requests for tours of the new food waste plant since it opened on site in November.

“This was a good opportunity to invite some of our farming community along to see the food waste facility and learn more about how we transform organic waste into renewable energy, fertiliser and waste heat,” he said.

“One hundred per cent of what we produce goes to agricultural land and we are delighted to be able to provide sustainable fertilisers to farmers.
He added: “The food waste facility means we are able to produce significantly more renewable energy, while also providing a sustainable solution for dealing with food waste which traditionally goes to landfill.

“Farmers also tell us that the fertiliser it produces improves soil structure and also provides a safe and cost effective alternative to inorganic fertilisers.”

Bristol’s first food waste recycling plant, which was the first to open at a sewage treatment works, can produce up to 10 GWh of energy a year from biogas, enough renewable energy to power 3,000 homes.