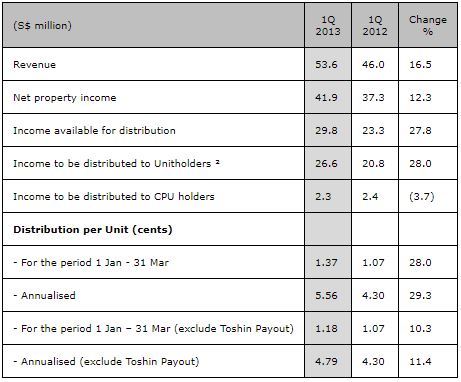 Tan Sri Dato' Dr Francis Yeoh, Executive Chairman of YTL Starhill Global, said, ''SGREIT delivered strong earnings growth in 1Q 2013 underpinned by the performance of its Singapore portfolio. We are rebalancing our asset portfolio with the strategic acquisition of Plaza Arcade in Perth, Australia, and divestment of one of the seven properties in Tokyo at the beginning of the year. Our Singapore properties will continue to benefit from tourism growth and penetration of new brands in Singapore.

Looking ahead, we are encouraged by the gradual upturn in the global economic outlook, though we remain vigilant in our approach as we continue to enhance asset returns and source for yield accretive acquisitions of prime assets in SGREIT's core markets when opportunity arises.''

Mr Ho Sing, CEO of YTL Starhill Global, said, ''NPI for our core portfolio based in Singapore grew by 25.3% in 1Q 2013 on a y-o-y basis, driven by full occupancy and positive rental reversions from both the retail and office segments. Following the completion of the asset development of Wisma Atria in 3Q 2012, we continue to enhance the positioning of the mall. New-to-market brands and new retail concepts will be introduced from 2Q 2013. We have also successfully concluded the rent review for our master tenant at Ngee Ann City, Toshin, with a 10% increase in base rent from June 2011. The accumulated rental arrears net of expenses amounting to approximately S$3.8 million will be distributed to Unitholders, together with the distributable income for 1Q 2013.''

Mr Ho added, ''As part of our proactive capital management initiative, we have recently entered into an agreement with a club of 8 banks to secure JPY7 billion and S$600 million unsecured three-year and five-year loan facilities to refinance approximately S$513 million debts maturing in September and December 2013. This will further enhance our financial flexibility and extend our average debt maturity profile. SGREIT would have no refinancing requirement for its existing debt portfolio until June 2015 following this refinancing.''

SGREIT's Singapore portfolio, comprising interests in Wisma Atria and Ngee Ann City on Orchard Road, contributed 67.7% of total revenue, or S$36.3 million in 1Q 2013. The Singapore portfolio's NPI for 1Q 2013 grew by 25.3% to S$27.8 million. The improvement was largely attributed to full occupancy driven by strong demand from international tenants and positive rental reversions for both the retail and office units. Revenue from Ngee Ann City retail gained 59.6% y-o-y, largely attributed to the 10.0% increase in base rent and the resulting rental arrears of the Toshin master lease from 8 June 2011 to 31 December 2012 received in 1Q 2013. A separate rent review for the period from June 2013 to June 2016 is in progress as Toshin has exercised its option to renew its lease for another 12-year term. In 1Q 2013, Wisma Atria's retail revenue increased 13.5% y-o-y and its NPI grew 8.4% over 1Q 2012.

SGREIT's Malaysia portfolio, comprising Starhill Gallery and interest in Lot 10 along Bukit Bintang in Kuala Lumpur, contributed 14.3% of total revenue, or S$7.6 million in 1Q 2013. NPI for 1Q 2013 was S$7.4 million, 3.2% lower than in 1Q 2012, mainly due to the depreciation of the Malaysian Ringgit against the Singapore Dollar. A rent increase of approximately 7.2% from the master leases is expected for Starhill Gallery and Lot 10 Property, following the start of the second term of the 3+3 master tenancy agreements in June 2013.

SGREIT's Australia portfolio, comprising the David Jones Building and the newly-acquired Plaza Arcade in Perth, Western Australia, contributed 7.7% of total revenue, or S$4.1 million, in 1Q 2013. NPI for 1Q 2013 was S$3.3 million, an increase of 5.2% y-o-y. The increase in NPI was largely due to contributions from Plaza Arcade from 1 March 2013. There are potential synergies to be reaped between the two properties. Connections and potential optimisation of unutilised space between the two buildings will be studied at a later stage. As at 31 March 2013, occupancy for the Australia portfolio was 99.5%.

Renhe Spring Zongbei in Chengdu, China, contributed 7.5% of total revenue, or S$4.0 million in 1Q 2013. NPI for 1Q 2013 was S$2.5 million, a decline of 12.8% from 1Q 2012. The easing in China's growth and the country's ongoing austerity drive have affected consumer sentiments, leading to a softening in the high-end and luxury retail segments. While the market is expected to remain active due to increased demand from international brands, newly completed malls in the city have intensified competition in the retail market. Renhe Spring Zongbei is continuously revamping its tenant mix to enhance its retail offerings as it remains focused as a destination for high-end retail shopping with an extensive VIP customer base. In the recent earthquake on 20 April 2013 in Lushan county, southwest of Chengdu, operations were not disrupted at Renhe Spring Zongbei and there was no known damage to the property.

SGREIT's Japan portfolio, which comprises six properties located in central Tokyo as at 31 March 2013, contributed to less than 3% of the Group's total revenue. NPI for 1Q 2013 was S$0.9 million, 37.8% lower than in 1Q 2012. The decline in NPI was mainly due to loss of income contribution from Roppongi Primo following its disposal on 1 February 2013, depreciation of the Japanese Yen against the Singapore Dollar and the provision for rental arrears.