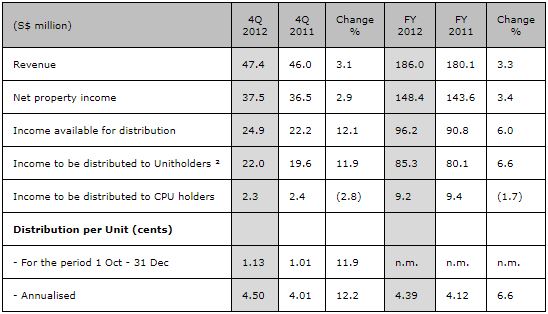 Tan Sri Dato’ (Dr) Francis Yeoh, Executive Chairman of YTL Starhill Global, said, “We are pleased to announce another good set of results for FY 2012. This performance represents the seven consecutive years of increment in DPU since SGREIT’s listing in 2005. Successful completion of the asset redevelopment work at Wisma Atria coupled with the record breaking visitor arrivals have contributed positively to our Singapore performance. Looking ahead, SGREIT’s portfolio of retail properties in good to prime locations is well-placed to tap on Asia’s growing wealth and affluence.”

Mr Ho Sing, CEO of YTL Starhill Global, said, "Singapore contributes over 60 percent of our portfolio, and continues to do well. Wisma Atria retail mall has achieved strong rental reversion since the completion of the asset redevelopment in September and the positive momentum is evidenced by the 23.5% rise in NPI for 4Q 2012. Healthy demand for office space in Orchard Road has also lifted the revenue for our office portfolio by 6.0% in 4Q 2012. On 24 January 2013, SGREIT proposed to acquire the Plaza Arcade in Perth, Australia. Located in the prime shopping stretch in Perth’s city centre, the Plaza Arcade is a valuable addition to SGREIT’s portfolio of quality assets in prime locations. The acquisition is accretive and being adjacent to our existing David Jones Building, there are also potential synergies to be reaped between the two properties. We have recently obtained a S$55 million unsecured revolving credit facility maturing in July 2014 which will further enhance our financial flexibility. We are also in active discussion with banks to refinance the term loan facilities maturing in September 2013."

SGREIT’s Singapore portfolio, comprising interests in Wisma Atria and Ngee Ann City on Orchard Road, contributed 62.7% of total revenue, or S$116.7 million in FY 2012. The Singapore portfolio’s NPI for FY 2012 grew by 6.8% to S$90.7 million over FY 2011. The higher NPI was largely attributed to strong rental reversion at Wisma Atria retail following the completion of asset redevelopment work in 3Q 2012, as well as higher occupancy and positive rental reversions for the office properties. The rental reversion achieved boosted Wisma Atria retail’s NPI for FY 2012 by 15.0% to S$39.3 million over FY 2011. In 4Q 2012, Wisma Atria’s retail NPI grew by 23.5% over 4Q 2011. With the successful repositioning of Wisma Atria, centre sales for the quarter increased 34.5% y-o-y and occupancy is almost full at 99.5%. With regards to the master lease in Ngee Ann City, 3 international licensed valuers have been appointed according to directions prescribed by the Court of Appeal. The valuers’ work on the rental valuation is expected to be finalised by 1Q 2013.

Renhe Spring Zongbei in Chengdu, China contributed 8.6% of total revenue, or S$16.0 million in FY 2012. NPI for FY 2012 was S$9.9 million, a decline of 8.7% from FY 2011. The mid to high-end luxury retail segment in Chengdu was soft in 2012. While newly opened malls in the city have increased competition in the retail market, Renhe Spring Zongbei remains focused as a destination for high-end retail shopping with an extensive VIP customer base.

The David Jones Building in Perth, Australia contributed 7.9% of total revenue, or S$14.7 million in FY 2012. NPI for FY 2012 was S$12.1 million, 1.2% lower than in FY 2011. The decline in NPI was mainly due to vacancies between tenancies in the last quarter, higher operating expenses and the depreciation of the Australian Dollar. As at 31 December 2012, the property was fully committed.

On 24 January 2013, SGREIT proposed to acquire the Plaza Arcade, a retail property located along the core retail stretch in Perth’s CBD, for A$48 million (approximately S$61.9 [3] million). The purchase price is equal to the independent valuation conducted by Colliers. Sitting on a freehold site located next to our David Jones Building, Plaza Arcade has a net lettable area of approximately 25,000 sqft and an occupancy of 97.6% as at 31 December 2012. Plaza Arcade’s yield is attractive at 7.8%, similar to our David Jones acquisition in 2010. The acquisition is expected to be approximately 1.9% accretive to SGREIT’s DPU[4]. There could be potential synergies to be reaped between our existing David Jones Building. Connections and potential integration and use of unutilised space between the two buildings will be studied at a later stage. The proposed acquisition is expected to be completed within the first quarter of 2013 and will be funded by a combination of debt and proceeds raised from SGREIT’s rights issue in 2009.

[2] Approximately S$0.6 million of income available for distribution for the quarter ended 31 December 2012 has been retained for working capital requirements.

[4] Please refer to the announcement dated 24 January 2013 relating to the acquisition of the Plaza Arcade.