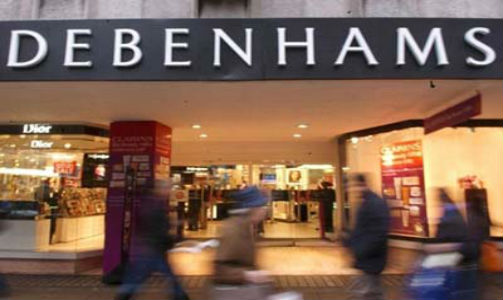 LONDON - Debenhams, Britain's No. 2 department store group, posted record Christmas sales, driven by a jump in online trade and a step-up in promotions.

The group said on Tuesday sales at stores open over a year, rose 5.0 percent in the five weeks to January 5, with like-for-like sales in the 18 weeks to January 5 - a big chunk of the firm's fiscal first half - up 2.9 percent.

That compares to analysts' consensus forecast for the first half to end-February of an increase of 2 percent.

The growth was boosted by strong demand online, with sales over the 18 weeks up 39 percent, ahead of the firm's expectations.

However it also had to rely on promotions to draw in the customers. Debenhams said the overall market had seen more promotions than the prior year which resulted in some increase in its own promotional activity in the run-up to Christmas.

As a result, it now expects gross margin for the 2012-13 year to be 10 basis points higher than last year rather than 20 basis points previously guided.

"We continue to believe that whilst consumers have become acclimatised to the new economic reality, we don't anticipate a significant change in consumer confidence in the remainder of the year," said Chief Executive Michael Sharp.

Many store groups are finding the going tough as consumers fret over job security and a squeeze on incomes.

Debenhams has generally bucked the gloomy trend, helped by its breadth of products, appeal to a wide range of customers, multiple routes to market and well received marketing campaign.

The firm's variety of product categories, with a core clothing offer supplemented by accessories, homewares and health and beauty, means it is also less exposed than other retailers to the vagaries of Britain's weather.

Debenhams also has a store at YTL's Starhill Gallery which stands as one of the largest stores in South East Asia. At over 37,000 sq ft, the store is the largest Debenhams in Malaysia and offers a host of new designer ranges as well as a fine furnishings and home accessory department.

Following its great success in the UK, shoppers have snapped up collections from Britain’s top fashion designers, at high street prices.

Following the escalator entrance from Bintang Walk, shoppers will be taken straight into Debenhams at Starhill Gallery’s Explore floor where they will be thrust into the world of the latest British fashion.

Separately on Tuesday an industry survey said British retail sales rose 0.3 percent in December. With annual consumer price inflation currently running at 2.7 percent, this suggests that stores sold less in real terms, increasing the chance that Britain's economy slipped back into contraction in the last three months of 2012.

Last week Next, Britain's No. 2 clothing retailer, reported a 3.9 percent rise in total sales for the eight weeks to December 24 and raised its year profit guidance. However, clothing market leader Marks & Spencer is forecast to report a further decline in general merchandise sales when it updates on its third quarter on Thursday.

Shares in Debenhams, which have doubled over the last year, closed Monday at 117 pence, valuing the business at 1.47 billion pounds. - AFP