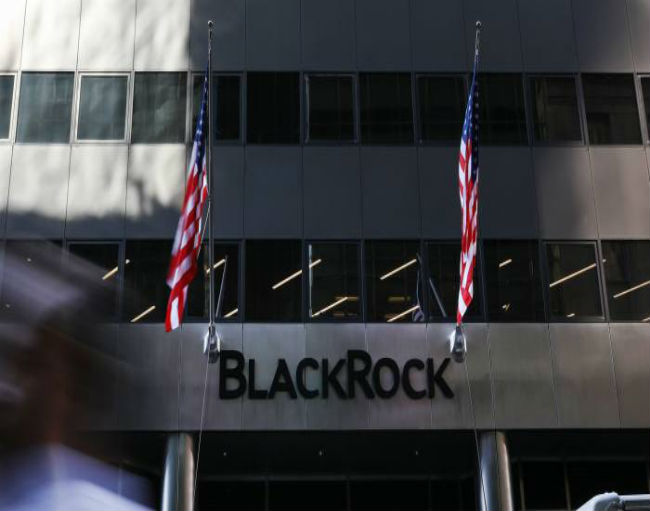 Shares in the company are down 30 per cent from their peak. Is this a warning of deeper problems in the market?

When Larry Fink went to the capitalist carnival in the snow otherwise known as Davos in January, he was a man on top of his world.

BlackRock, the company he founded in 1988, was comfortably the biggest investment group on the planet, with more than $6tn of assets under management. During a record-shattering 2017, the group managed to pull in more than $1bn a day from investors. Its shares hit a record high on the eve of Davos, and a public letter Mr Fink sent to fellow chief executives exhorting them to ensure their companies had a social purpose was the talk of the conclave.

“I didn’t know Larry Fink had been made God,” said an irritated Sam Zell, the billionaire property investor who took exception to the letter.

But as BlackRock celebrates its third decade, its vast money-gathering machine has begun to splutter, raising awkward questions over its business, the investment industry more broadly and the health of global markets.

BlackRock’s long-term net flows — a measure of how much money investors are handing it, excluding more short-term volatile cash management vehicles — have sagged throughout the year to a two-year low of $10.6bn in the third quarter, the company revealed in its latest results this week. If you include all flows, then BlackRock suffered its first quarterly investor withdrawal since the market crash of August 2015.

Mr Fink laid the blame on choppier financial markets, which have prompted nervous investors to scale back their exposures. “Divergence in monetary policy and macro and geopolitical uncertainty continues to impact investor sentiment and our financial markets, leading many clients to reduce risk in their portfolios,” BlackRock’s chief executive and founder said in a conference call on Tuesday.

However, Mr Fink said he was confident that the “disappointing” flows were a temporary setback. And it is worth noting that BlackRock’s vast panoply of investment products — from cheap exchange traded funds to pricey, complex hedge fund strategies — have still taken in more than $80bn this year. That would be the envy of almost any other asset manager.

Indeed, BlackRock’s 2018 inflows on their own would easily make it one of the world’s 200 biggest investment groups — and the year is not over yet. And at almost 34 per cent, its adjusted net income profit margin is higher than that of Google or Apple.*

The company’s overall assets under management have also been buoyed by rising markets, hitting a record of $6.44tn in the third quarter. That makes it bigger than Fidelity, Pimco and T Rowe Price combined. And sales of its technology — primarily its foundational risk management system Aladdin — are growing at a healthy clip.

Nonetheless, BlackRock’s shares have been pummeled this year. After hitting a record $593.26 on January 22 — up more than 500 per cent from their post-crisis nadir in March 2009 — its stock has tumbled over 30 per cent. Its overall 2018 performance is in the bottom quartile of the S&P 500 index, despite earnings ahead of expectations.

A fall this severe is hard to ignore, especially given how BlackRock’s size and sprawl makes it a bellwether for broader forces at play in the financial system. So is this a blip, a natural correction after a phenomenal post-crisis run, or a hint of deeper problems — for BlackRock and global markets?

On September 24, a remarkable, if virtually unnoticed, event took place in financial markets: the return on three-month Treasury bills — essentially the global finance industry’s closest approximation of hard cash — rose above the core US inflation rate for the first time in a decade.

The US economic recovery has spurred the Federal Reserve into a series of interest rate rises since 2015, to ward off the danger of overheating. That has echoed through bond markets, and pushed up short-term debt yields to levels not seen since before the financial crisis.

As a result, investors who have long complained about “ Tina” — the idea that There Is No Alternative (to buying equities) — now have some other options. Cash may not be enormously attractive, but at least you can once again make a little money, even after inflation, through short-term T-bills. That has big implications for financial markets and the investment industry.

Rising bond yields have already contributed to two market squalls this year, in February and this month. Markets regained their footing on both occasions, but there is a growing sense that the long post-crisis recovery and bull market could be nearing its end. Global growth is weakening, and while the US economy is red-hot at the moment, that has fanned fears that the Fed will have to keep raising interest rates — which could spell more strife for emerging markets in particular.

“With all the problems that the global economy currently faces, it is appropriate to say that ‘winter is coming’,” Indonesian president Joko Widodo joked at the IMF’s annual meeting in Bali this month, a reference to the television series Game of Thrones.

It is these financial cross-currents that BlackRock’s performance reflects. Although its business may be one of the most diverse and resilient of any investment group, it is still sensitive to the ebb and flow of overall investor sentiment.

“Asset managers basically are the market,” says Alexander Blostein, an analyst at Goldman Sachs. “And any time we see an inkling of slower growth people get really nervous.”

BlackRock is also confronting a seismic longer-term shift in the investment industry, where it is both protagonist and victim. The global asset management business is facing intensifying pressure from cheap, index-tracking funds, which have sucked in hundreds of billions of dollars since the financial crisis and contributed to a broader reappraisal by investors of how much they should have to pay.

The average cost of US bond and equity funds has slipped from 0.76 per cent and 0.99 per cent of the investment respectively in 2000 to 0.48 per cent and 0.59 per cent last year, according to the Investment Company Institute. More complex, pricier strategies such as hedge funds are also feeling the pinch.

Industry insiders are bracing themselves for further declines in fees over the coming years. In what some fear — and investors hope — was the starting gun in a “race to zero”, Fidelity recently launched the first free index-tracking fund, underlining just how intense the competition for assets has become.

In 2016 the global investment industry’s revenues and profits shrank for the first time since the financial crisis, according to Boston Consulting Group. Although buoyant markets boosted profits again last year, this succour will not last, the consultancy warned in a report this year. This week’s announcement of Invesco acquiring OppenheimerFunds for $5.7bn is the latest in a string of defensive deals that highlight how investment groups are bulking up to protect their positions.

“Fee compression is happening across the board,” says Brent Beardsley, senior partner at BCG. “The industry still has really high margins, which means there is a lot of room to shrink.”

BlackRock is the world’s largest provider of ETFs, a sector with $5.25tn of assets globally, according to consultancy ETFGI. As such it has made hay from the shift towards passive investment products. But it is also feeling the heat from the price wars raging both in the ETF world and in active funds. The average fee rate of BlackRock’s funds slipped to 0.179 per cent in the third quarter, down from 0.189 per cent a year ago, and 0.223 per cent seven years ago, according to Morgan Stanley.

Tom Wojcik, global head of investor relations at BlackRock, attributes the dip to factors beyond its control, such as currency movements and diverging markets. The US stock market, where BlackRock has relatively more cheap funds, has had a strong run over the past year, buoying its assets under management, while Europe and emerging markets have sagged lower. That has reduced its average fees, according to Mr Wojcik.

“Domestic, lower-fee assets that we manage have grown, and the higher-fee assets have contracted, just because of market movements,” he says. “Even in a more challenging environment, we are still growing the business.”

Analysts largely agree that a few weak quarters does not dent BlackRock’s positive longer-term trajectory. Indeed, they have rushed out notes arguing that the deepening tumble is a golden buying opportunity.

They point out that the investment group suffered a similar dip in fortunes in early 2016, when concerns over China’s economy convulsed global markets. But BlackRock dusted itself off and quickly resumed its growth trajectory.

“BlackRock has slowed down not because of the franchise, but because of the environment,” says Michael Cyprys, a Morgan Stanley analyst. “There’s stability that comes with diversity.”

The open question is therefore whether the environment ameliorates, remains turbulent or worsens. Markets have largely bounced back from last week’s turmoil, and most economists forecast continued strength in the US economy. The global outlook may be dimmer, but for now there are few signs of a setback that would pose a serious challenge to the bull run.

Nonetheless, investors are likely to remain wary of the short and long-term headwinds buffeting asset managers — much to the frustration of many industry executives.

“Asset managers are being priced almost like the industry is disappearing,” says Martin Flanagan, chief executive of Invesco. “The industry is changing, but it’s not going away. It’s not a retail mall in Des Moines, Iowa, where Sears is the anchor tenant.”

* = This article has been amended since initial publication to clarify the profit margin measure. BlackRock uses adjusted operating margin, which currently stands at 44.2 per cent.