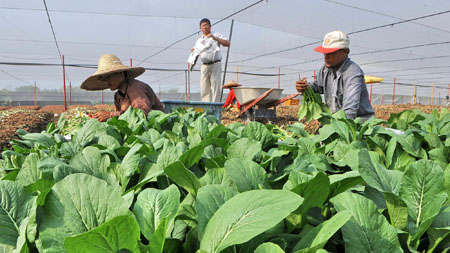 Singapore, one of the most urbanised nations on earth, is making land available for agriculture for the first time in decades for farmers to come up with high­-tech ways of improving the city-­state’s food security.

About 60 hectares of land will be released for farming from August, in a move authorities describe as providing a “buffer” against disruption in the supply chain.
Singapore is the third most densely populated jurisdiction in the world, with only the Chinese territory of Macau and the Mediterranean principality of Monaco boasting more people per square kilometre.

The south­east Asian city­-state imports more than 90 per cent of the food needed to cater for its 5.6m inhabitants, and outbreaks of disease among overseas suppliers are quickly felt in price rises at markets.

Singapore’s government is also concerned about the impact of climate change on catches of wild fish, a central part of the local diet.

“Given our limited space, we will not be able to produce all the food we need,” Lawrence Wong, Singapore’s minister for national development, said in a blog post. “However, new farming technologies allow us to significantly boost our production levels.”

Farmers bidding for the new land will be encouraged to outline their plans to raise productivity as well as competing on price.

Land for agriculture is scarce in Singapore and it can be hard to find skilled agricultural labour but farmers benefit from government funding for research and development.

Local farms produce about a quarter of the eggs consumed in Singapore, 8 per cent of the vegetables, and a similar percentage of the fish.

Eric Ng, chief executive of Apollo Aquaculture, a business rearing grouper and shrimp in Singapore and Brunei, said he planned to push vertical fish farming to greater heights if he can obtain a portion of the newly released land.

Eugene Tan, a political analyst at Singapore Management University, likened the farming plan to Singapore’s efforts to achieve self­-reliance in water through rainwater catchment, recycling and desalination. Water technology developed in Singapore has been exported globally “The food security gains won’t be significant — we’re not talking about a quantum leap that will let us be self-sufficient in eggs, for example,” Mr Tan said.

“But if we can pioneer technology in the farming sector, this could eventually be exported, particularly to countries where land commands a premium.”

While food security has increased in importance globally, the availability of cheap and nutritious meals at hawker centres is particularly central to Singaporean life.

The hawker stalls that serve up traditional favourites such as char kway teow* and Hokkien mee (both noodle dishes), are regarded as a safety net for the poorest as well as a place where all levels of society meet. Politicians are conscious of the need to keep a lid on prices at these stalls.

Singapore’s government recently supported a vast farming venture in north­east China, which is intended to provide a reliable supply of pork and other staples.

The Jilin farming project, managed by a public­-private partnership, covers 1,450 sq km — an area twice the size of Singapore.