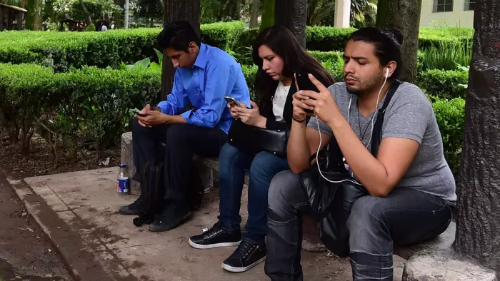 With long queues, high fees and low cash machine coverage, Mexican banks have a reputation for poor customer service. A recent Gallup poll found that more than three in four customers were indifferent to, or unhappy with their bank.

This is creating an opportunity for new fintech — financial technology — challengers. They are focusing in particular on people who have not had access to banking services before.

Finnovista, a fintech start-up accelerator, believes these upstarts could take up to 30 per cent of Mexico’s banking market in the next decade, with retail banks and payment services particularly vulnerable. More than half of Mexico’s fintech companies are focused on payments and remittances or lending.

Some 158 fintech companies operate in Mexico, the second highest number in Latin America after Brazil. One of them is Albo, which offers smartphone banking services.

“Mexican banks are very inefficient,” says Ángel Sahagún, co-founder of Albo. “If you have any problem you have to visit a branch and queue for 30 minutes. Young people, in particular, have higher expectations.”

Albo, which launched in October 2016, is still relatively small, with around 5,000 clients. But Mr Sahagún is hoping to join fellow Mexican fintech stars such as Clip, which provides credit card readers for mobile devices, Kubo Financiero, a peer-to-peer lender, and Kueski, a micro-lender, all of which have secured serious investment.

Many ventures have prospered by addressing gaps in the traditional banking model. The World Bank estimates that 61 per cent of Mexican adults are without a bank account and there are only 14 bank branches per 100,000 inhabitants, compared to 33 in the US.

The problem of low bank branch coverage is compounded by Mexico’s under-developed transport infrastructure. In 2015, the government’s National Survey for Financial Inclusion said the average travel time to a bank branch — by car, bus or on foot — was 42 minutes in rural areas and 22 minutes in urban settings.

The same survey found that half of the adults without a bank account said this was because their income was “insufficient or variable”.

Financial education seems to play a major role. More than half of adults surveyed did not know of the existence of basic accounts that do not charge fees.

Financial exclusion in Mexico is a problem but “also an opportunity,” says Francisco Meré, the director of Bankaool, which became the country’s first online-only bank in 2012.

Mexico is already a regional hub for start-ups focused on financial inclusion. Finnovista estimates that Mexico accounts for 35 per cent of all the fintech companies in Latin America catering for the underbanked or unbanked.

Although traditional banks are also keen to reach new customers, they still depend heavily on human resources.

“The cost of engaging a customer through technology is a fraction of using a branch,” says Mr Meré.

The Pew Research Center found that smartphone ownership in Mexico reached 35 per cent in 2015, while only 29 per cent of adults accessed credit, according to government statistics.

Mexico’s banks have also failed to provide for the country’s micro, small and medium-sized firms.

Although these made up more than 99.8 per cent of Mexico’s enterprises in 2014, they received only 11.1 per cent of total bank credit for businesses, including loans, overdrafts and credit cards.

Now, peer-to-peer lending platforms such as Kubo Financiero have seized on the opportunity to match savers with borrowers.

“Our goal is to penetrate areas where financing is too expensive,” says Vicente Fenoll, who founded Kubo in 2011.

Faced with rapid fintech growth, the Mexican government has proposed new laws to regulate such activity. A draft bill, coming before Congress in September, targets crowdfunding, cryptocurrencies and payment technology.

Fintech firms could be required to register and to link their operations with a bank account in order to protect consumers and help detect money laundering.

Crowdfunding companies could also be asked to submit their methodology for borrowers’ risk to the National Banking and Securities Commission (CNBV). Some fintech entrepreneurs are concerned that the proposed law could lead to heavy compliance costs, stifling investment in the industry.

Others, however, feel a regulatory framework would improve the credibility of fintech in Mexico.

“It will involve additional costs,” says Mr Fenoll. “But ultimately, I think regulations will build confidence among users.”