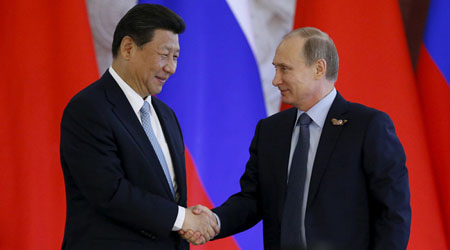 by Kathrin Hille in Moscow and Charles Clover in Beijing

On the sidelines of Beijing’s Belt and Road forum on China’s multibillion dollar regional infrastructure programme, Chinese president Xi Jinping told his Russian counterpart Vladimir Putin that their countries were the “ballast stone” of world stability.

For his part, Mr Putin, who has been given prime billing at the meeting, used the occasion to draw parallels with Moscow’s own regional initiative, the Eurasian Economic Union, and said the Chinese and Russian plans were complementary. Eurasian integration, he said, “is a civilisational project for the future”.

But few have failed to notice that many of the countries figuring prominently in China’s vast trade and investment initiative are also part of Mr Putin’s EEU — for example central Asia’s former Soviet republics of Kazakhstan and Kyrgyzstan. Some whisper darkly that China is encroaching on a traditional Russian sphere of influence.

“The most unpleasant issue for us is that China is becoming a serious centre for integrational processes in Eurasia, which it never was in the past,” said Vladimir Portyakov, deputy director of the Institute of Far Eastern Studies at the Russian Academy of Sciences. “Instead of linking up the Eurasian Economic Union and the Belt and Road, we may end up with the EEU being subordinated to this Chinese scheme.”

Mr Xi was careful in his speech to point out that the Belt and Road project, with hundreds of billions of dollars pledged for investment and trade, would not cut across other countries’ regional trade projects such as the EEU or Turkey’s “Middle Corridor” plan to link up with other Turkish­speaking states. China, Mr Xi insisted, was not seeking to replace existing trade partnerships.

“The aim of Belt and Road is not to reinvent the wheel,” he said. “Rather, it aims to complement the development strategies of countries involved.”

But Moscow has taken note of the sharp contrast between Mr Putin’s status as the forum’s most favoured guest and the fact Russia has so far failed to gain any significant benefits from the Chinese initiative.

“Russia hasn’t found a satisfying place, a reflection of its interests in this initiative, and China has not been able to propose an attractive role for Russia in it,” said Yuri Tavrovsky, a China expert close to the nationalist Eurasianist school of Russian academics.

Without Russia, they argue, China’s grand Eurasian web of transport links will never come alive — and Russia should demand that China pay much more for access to those links than it currently does China accounted for 70 per cent of cargo transit volume on Russian railways last year — partly for shipping
goods from central and western China to Europe overland, and partly for transshipment of cargo from north­east China through Russian Pacific ports to southern Chinese ports.

Even though most rail and road transport to the west from China under Belt and Road projects run south of Russia, they need to cross European Russia to reach Europe from Kazakhstan.

High hopes among Russian government and corporate officials that Beijing’s push could help reconstruct the farflung country’s dilapidated transport infrastructure have fallen through. While some Belt and Road projects in countries from Kazakhstan to Pakistan have proceeded, plans to develop Russia’s far east with Chinese money or have Chinese investors build a high­speed toll road from the southern Russian city of Kazan to Moscow have been abandoned.

And Russia’s concerns go much further than just missing out on Chinese investment. Moscow is conscious that the Belt and Road initiative could pose a threat to its own ambition to dominate the post­Soviet space.

Early on, Russia started pushing Beijing to negotiate a formula for how Belt and Road would link up with the EEU, a pet project of Mr Putin which apart from Russia includes Belarus, Kazakhstan, Armenia and Kyrgyzstan and has started signing trade deals with third countries from= Vietnam to Moldova.

But despite a 2015 joint pledge by Mr Xi and Mr Putin to seek integration of the two economic spaces, subsequent discussions have yielded next to nothing.
“Our Chinese colleagues speak of ‘win­win’ all the time, but sometimes you wonder whether they are willing to consider our interests at all,” said one Russian government official involved in those talks. “They have to make some compromises if they want us to get anywhere.