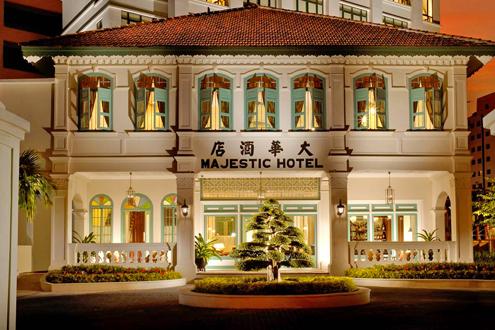 Of all the gin joints, The Majestic Malacca's Bar at the Mansion aims to please the most discerning of imbibers, without forgetting the gourmands either.

Steeped in history, heritage and culture, Melaka's popularity among travellers is easy to understand. And, if you are looking for a hotel that could well be a destination in itself, then The Majestic Malacca might prove to be the perfect place. A beautifully restored 1920s Straits Settlement mansion forms the main structure of the property. It houses the main lobby, bar, library and a restaurant on the first level while the spa and rooms are housed in a newer extension that is set just behind the original structure.

Stepping into the building, one immediately notices the beautiful porcelain tiles - a distinctly Peranakan design element. The tiles as well as the teakwood fittings have been maintained from the original mansion, formerly the private residence of tycoon Leong Long Man. The building was acquired by businessman Lim Heng Fang in 1955, and he turned it into The Majestic Hotel, which ceased operations in 2000. YTL Hotels acquired the property in 2006 and extensively refurbished it.

In the reception area, large glass jars filled with popular Malaysian snacks like preserved sour plums, iced "gem" biscuits, dried green peas and salted broad beans evoke nostalgia. The hotel is also set near the banks of the Melaka River, which during Melaka's glory days as a trading hub teemed with Chinese junks and spice-laden vessels that travelled to the coastal city to trade at its bustling port. Today, the river that played a key role in the state's colourful history is best explored via a slow, sunset cruise.

For the love of gin: The Bar Cart

The Bar at the Mansion occupies a discreet corner of the lobby area, the gleaming bottles seeming to wink cheekily, beckoning arriving guests. The mahogany-coloured bar invites one for an evening aperitif or a nightcap before heading up to the comfort of your room. When it comes to the choice of drink, it is truly a matter of to each his own, but the focus of the recently unveiled Bar Cart is gin. It aims to cater for gin lovers and nurture an appreciation for the spirit, which has become increasingly popular in recent times. Regarded as a medicinal remedy in the early years of its creation, the spirit has experienced a revival of sorts with an inclination towards botanical infusions and gin cocktails.

The Majestic Malacca offers a unique gin experience - Tranquerah's limited-edition Malacca Gin is available exclusively here, according to YTL Hotels vice-president of marketing, Geraldine Dreiser. Malacca - which made a comeback in 2013 - is more subtle than the juniper-heavy iconic London Dry Gin. It is also sweeter on the palate, with hints of grapefruit and citrus that lend a distinctive floral scent.

The interactive Bar Cart is the result of a collaboration between The Majestic Malacca and CK Kho - who was voted Bartender of the Year at the 2017 Bar Awards and is the brains behind bars such as Pahit in Bukit Bintang and Coley in Bangsar. Guests can try their hand at making a cocktail based on recipe cards provided: Pandan-Infused Gin & Tonic (RM35), Malacca Collin (RM40), Celery Gimlet (RM40), and Malacca Gin, served neat (RM80). The Malacca Collin, with the sweetness of gula Melaka alongside a splash of zesty lemon juice, appeared to be the crowd favourite on the night of the unveiling.

Another recent feature of The Majestic Malacca that is bound to appeal to epicureans is the Kristang Culinary Journey. Marrying history, culture and cuisine, the gastronomical experience aims to showcase the heritage-rich Kristang food and is led by its in-house celebrity chef extraordinaire Melba Nunis, who is passionate about her culture and cuisine. Having written two cookbooks - the first of which is a compilation of her family's treasure trove of recipes - Nunis is the perfect person to introduce guests to the world of Kristang cuisine.

The Kristang Culinary Journey begins with a visit to the local wet market, where our lively guide introduces us to the common ingredients used in a Kristang kitchen, such as the multitude of spices, gula Melaka and freshly grated coconut. We also learn what to look for in choosing the squid for her special black squid dish as well as flower crabs used to make her popular inchimintu karangezu (stuffing of crab meat, minced chicken, prawns and vegetables baked in a shell).

Upon returning to the hotel, we enjoy a snack of pulut hitam and coconut cake before proceeding to our cooking class. Dressed in orange aprons that match the chef's orange uniform (a tribute to the traditional patui card game, Nunis tells us), we begin cooking a number of Kristang dishes under her guidance. An ardent believer of cooking from the heart, the high-spirited chef encourages us to add our own twist to her recipes. "Everyone has a different palate and preference," says Nunis, who encourages us to agak-agak (estimate) the amount of seasoning preferred for each dish. "Most importantly, cooking is about being happy."

The afternoon culminates with a feast made up of the dishes we cooked in class. for those who find themselves still craving Kristang cuisine during their stay at The Majestic Malacca, the authentic and delicious offerings at Melba at The Mansion are bound to satisfy. In fact, guests can also purchase bottles of the chef's kari debal paste, sos cili fresku or kaya (coconut jam) to relive their history-drenched gourmet holiday at home.