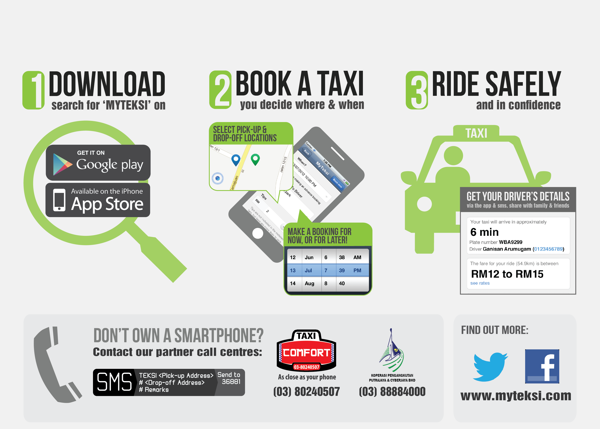 During a chat with MyTeksi co-owner and general manager Adelene Foo recently, all she would diplomatically but confidently say about its competitors was that it was a “free motivation push” one that the team at the taxi-booking app company embraces.

This was before the whole saga with yet another app-based transport service provider Uber blew up in September with Malaysia’s Land Public Transport Commission or SPAD – the latest in a series of legal tangles the rival United States based global company faced with transport regulators worldwide for its controversial business model.

In light of Uber’s open attack and vilification of local taxis and taxi companies as the ones to blame, (as stated in a circulating email recently sent to its users – “the taxi industry is asking the government to protect them from competition that would improve service for Malaysian….”) it inevitably brings mind the earlier conversation I had with the team fighting the other corner, MyTeksi.

“It is up to us to defend their reputation as well,” Foo says passionately, a running theme throughout my catch up with the busy young entrepreneur.

Those familiar with MyTeksi, founded by Harvard Business School graduates Anthony Tan and Tan Hooi Ling (Foo came in slightly after), would know that they stick to their belief in working with local raxi drivers, to the point where one would be forgiven to think it’s borderline preachy.

It certainly goes against popular opinion, as Foo notes the horror stories and warnings all over the Internet; most notably by travellers’ website TripAdvisor, on the bad behaviour of Malaysian taxi drivers, not to mention the regular derision by the Malaysian public.

While we were on that topic, Foo wore a composed, almost maternal smile, one that belied her patience and determination. She talks about kicking out drivers and passengers who are not up to MyTeksi’s standards, and adds: “I don’t believe there are one or two bad apples.”

Speaking with the authority of someone who has gone down to the trenches, so to speak, of dealing and getting around day in, day out with taxi drivers, Foo clearly believes that things are changing — even if it’s one case at a time.

It’s hard not to be convinced, whether it’s a public relations spin or otherwise, that MyTeksi (known in Southeast Asia as GrabTaxi) is hitting its three main key points effectively: safety, speed and certainty, as it has the figures to back up its bet on local cabbies.

At around 1.5 million app downloads to date and a reach of 16 cities across six countries — Malaysia, Singapore, Thailand, Vietnam, the Philippines and Indonesia — MyTeksi now boasts a “one­in­two” ratio of drivers registered under them here in the capital, while across the region, some 25,000 to 30,000 taxis are registered under the app service.

From its start in June 2012, the company now averages one booking every two seconds and has over 270,000 active users monthly (bookings of at least once or twice a month).

It all boils down to “solving the local problem”, said Foo of its business model. The often repeated story behind the beginnings of MyTeksi in tackling the taxi problem in Malaysia is still its compass for staying on track. Their solution was to start with increasing the drivers’ income capacity, increasing efficiency, and reducing time and cost spent looking for customers, which in turn should help them better their livelihood.

Pandiyan (full name withheld for privacy) became a taxi driver only two years ago, but attests to a 40% to 50% increase in business since signing on six months ago at a friend’s recommendation.

On a good day, earnings can go up to slightly more than RM200, before subtracting car rental, petrol and maintenance.

“It also saves petrol and customers, especially women feel safer,” the almost 50­year old adds, since the driver’s details are presented to passengers as they book.

A more experienced taxi driver, Zainuddin, says his earnings have not seen much change, but for him the key is safety and security. “It can also be dangerous for us. Now we get each other’s numbers and details. It is safer for me and the passengers,” he points out, adding that it’s also nice to be able to check the app to pick passengers based on convenience.

He further divulged that the 5% to 10% rate charged by MyTeksi was lower than a rival app­based company he used to be registered under. However, he states, it can be frustrating “bidding” for a customer when there are several MyTeksi registered cabs around. “It’s up to the system to match. Sometimes, even though we’re so near we can’t get the customer.”

Recently raising more than US$15 million (RM48.3 million) in a Series B funding from investors, Foo said the proud local start­up is now going through a season of maturity. In Malaysia and Singapore, where it is between eight and 15 times ahead of the nearest competitor, the structure has grown and widened, while the company still runs lean as a new start­up in other Southeast Asian countries.

But their “hyperlocal” social enterprise model remains. “In terms of [any] city being easier to penetrate, we don’t really benchmark it that way.

“The challenges are very different, though most of the pain points for consumers and taxi drivers are similar,” she says, citing how issues like safety comes up in the Philippines and Malaysia with smartphone network issues following closely behind. In Singapore, Foo says laughingly, it’s always about speed, “Singaporeans cannot wait for their taxi.”

MyTeksi’s temptation at this point might be to deviate towards monetisation and start “making much more” money, even as rumours were rife about them heading towards initial public offering (IPO). But the general manager is candid that while they are generating positive revenue, the current main goal is to be No 1 in Southeast Asia when it comes to helping people commute.

“There are 650 million people in the region. We want to see how we can have an impact on this number of people.”

Essentially it is a business based on loyalty and trust — MyTeksi does not impose an exclusive contract on its taxi drivers, and are aware there are some who use more than one app service.

Foo, nevertheless, expresses confidence in its ability to continue “solving” the issues between our local drivers and Malaysian customers.

And it goes beyond the money.

Foo shared a story about taxi driver John who once brought a luxury handbag containing US$1,000 (RM3,280) into the MyTeksi office.

Soon the Spanish tourist who left it in John’s car called but she did not expect to find it safely kept for her to collect.

She insisted on meeting John, who had to turn back to the office, only to give him (and everyone in MyTeksi) a big hug, as Foo recounted that the lady repeatedly exclaimed in disbelief after reading all the reviews on our local taxi drivers online. But it was when John politely declined the US$500 reward that she offered that Foo felt the proudest.

“I told him that it was people like him who made my job worth doing,” Foo says.

It is also why Foo insists on a strict code of ethics and conduct, just as she mentioned at the beginning . “People ask us why must we go to that level [for the taxi drivers]? It’s so that people will believe in the system again, believe in the platform again.”