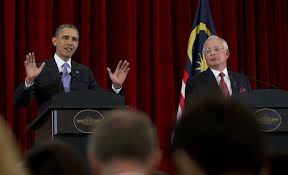 PRESIDENT Barack Obama is very much a great leader of the US — a world power in our time.

He knows exactly what he is saying and doing and also the wrongs that need to put right whenever making speeches or statements in public — let alone in a foreign land.

A man in his office will surely do his homework before making anything public.

So, Obama’s call for equal rights for all Malaysians is laudable though belated.

Indeed, we have quite a bit of freedom for religious practises and choice of beliefs but not so when it comes to funding, to build and maintain temples and churches. These places of worships are all built and maintained with donations received from members, believers and philanthropists including fundraising charities.

There are also limited land resources for new temples and churches, especially with regards to land allocation.

To quote Obama: “There shouldn’t be reason to discriminate, and you have to make sure that you are speaking out against this in daily life.”

To those who attended the meeting for Asean youths, he said: “And as you emerge as leaders, you should be on the side of politics that brings people together rather than drive them apart.”

The bottomline is, there is no fear who our leaders are in government so long as they do it right, fair and free from corruption and do not play up racial politics.