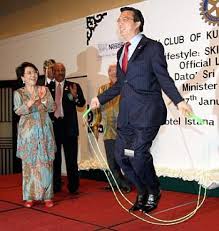 PETALING JAYA: Malaysia is the fattest country in South-East Asia with its obesity rate on the rise, says Datuk Seri Liow Tiong Lai.

“This is not a glorious title. We are outweighing our Asean neighbours and number six in the whole of Asia – behind some Middle Eastern countries,” said the Health Minister.

Citing statistics from the National Health and Morbidity Surveys, Liow said 15.1% of Malaysians aged 18 and above were suffering from obesity as of 2011.

“This is an increase from the 14% figure of the same demographic in 2006,” he pointed out.

It was also reported that over 2.6 million adults were obese while over 477,000 children below the age of 18 years were overweight.

Liow said the rate of Non-Com­municable Diseases (NCD) such as diabetes, cancers and cardiovascular problems had also increased dramatically among Malaysians.

“This exciting era of electronic gadgets and instantaneous communication is actually a double-edged sword,” he said.

“We are increasingly becoming couch potatoes; we are not leading an active enough lifestyle to prevent ourselves from becoming obese, which is a precursor to many health problems,” he said at the launch of “Healthy Lifestyle With Skipping” programme in Hotel Istana yesterday.

Liow said the programme, in coo­peration with the Rotary Club of Kuala Lumpur DiRaja and Nestle, was to promote skipping as a sports activity.

“Skipping for about one minute burns approximately 11 calories.

“Skipping non-stop for about four minutes can burn the equivalent number of calories in a glass of teh tarik,” he said.

The programme’s organising chair­man Mohd Ajmal Khan Ahmed Maideen said the ministry had given a RM100,000 grant through MySihat for the project.

“We currently have 100,000 skip ropes which will be distributed to around 200 schools nationwide and we will work with the schools to ensure that the ropes are utilised. We also plan to have skipping competitions, culminating in a mass rope skipping event in Dataran Mer­deka this September,” Mohd Ajmal said.