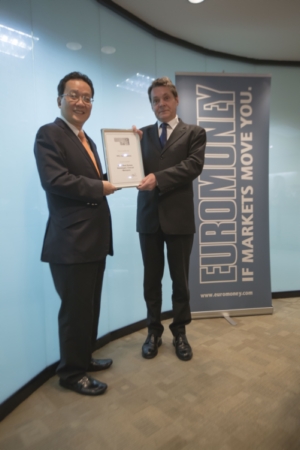 Euromoney Magazine, now in its 46th year of continuous coverage of the developments of the global capital markets, is the undisputed leading monthly magazine in the world of finance. The Euromoney Real Estate Survey was conducted from March 24th until June 1st 2015. A total of 1,754 valid responses were received representing a 10.6% increase on the 1,586 responses received in 2014.

The survey was filled in at country level by senior executives and had two distinct components: Part 1 (Nominations) and Part 2 (Market Feedback). In a change from the past, the survey results this year were based only on the peer nominations and voter participation scores (no quantitative data was analyzed).

In Part 1 of the survey respondents nominated the companies which they thought were best, second and third in each category in their country. Four, three and two points were respectively awarded to each of those nominations in that category and country. A small number of participation points were allocated to the respondent's own firm for nominations provided for their peers. Respondents provided their individual opinions rather than those of their company.

The overall category results were produced by aggregating the nominations points received and the participation points awarded for nominating peers.

In Part 2 of the survey respondents were asked to provide their views on the latest developments in the market. The responses to these questions were only of editorial interest and were not scored for the rankings.

“We are honoured to be acknowledged as Malaysia’s best real estate developer by professionals and industry analysts worldwide in recognition of our performance, accomplishments and contributions to the real estate industry. This award is testament to our vision to deliver truly valuable branded real estate for our Malaysian and international markets by leveraging on the diverse expertise and experience of the YTL Group,” said Dato’ Yeoh Seok Kian, Executive Director of YTL Land & Development Berhad, a subsidiary of YTL Corporation which undertakes property development projects.

Founded in 1955, YTL Corporation is a leading Malaysian conglomerate with a stellar track record of highly successful development projects in Malaysia and the region. Listed as one of the largest companies on the Bursa Malaysia since 1985, the conglomerate is also the first non-Japanese Asian company to be ever listed in the Tokyo Stock Exchange in 1996.

YTL Corporation is known for its illustrious history of innovation and strategy to consistently provide world-class products and services at very competitive prices. Committed to long term business perspectives, YTL Corporation has recorded a compounded annual growth rate in pre-tax profits of 55% over the last 15 years and received numerous international awards honouring its numerous enviable achievements.

YTL Group also has a strong focus on sustainability as a cornerstone of its business ethics; with a strong belief in doing good through sound business practices, and bringing about positive changes to the communities that it builds and protecting the environment for the benefit and betterment of future generations.