The Majestic Hotel Kuala Lumpur played host to The Majestic Tiger Ball, a fund-raiser organised to aid global charity initiative Save Wild Tigers in their conservation efforts. The event was graced by influencers, celebrities and socialites from across the globe. The high profile event was attended by more than 600 guests decked in tiger-inspired black tie attire.

The highlight of the gala dinner was the much-anticipated auction – in particularly that of the magnificent Crystal Tigress, a stunning sculpture embedded with over 50,000 Swarovski crystals that was designed  by acclaimed British artist Lauren Baker.

The extraordinary piece journeyed through several countries to raise awareness on the sharply declining numbers of wild tigers, before concluding its journey at The Majestic Hotel on September 25th. The glittering, hand-made sculpture was snapped up by private British buyer based in Johor, Malaysia. Other notable auction items included a five-nights stay at YTL Hotels’ ‘Distinctively Borneo’ Gaya Island Resort and a signed guitar by Dr. Brian May, CBE, PhD FRAS, founding member of the legendary British rock band Queen.

The charity dinner was launched by Her Royal Highness Sultanah Pahang Sultanah Hajjah Kalsom, Royal Patron for the night. The original Malaysian diva songstress Ning and top vocalist Jaclyn Victor who was the country’s first Malaysian Idol, came together in the effort to save wild tigers, the first event ever to see them perform together. Budding songstresses Amanda Imani and Natasha Sass also regaled the crowd, while top fashion designer Datuk Tom Abang Saufi added inspirational elements. Numerous international artists also graced the stage and joined the cause, including Maria Sascha Khan, a world-renowned ballerina whose father is Malaysian; Leee John of the popular 1980s soul band Imagination who wowed the crowd and got them to bogey, and American music post-disco outfit Pure Energy of ‘You’ve Got the Power’ fame. 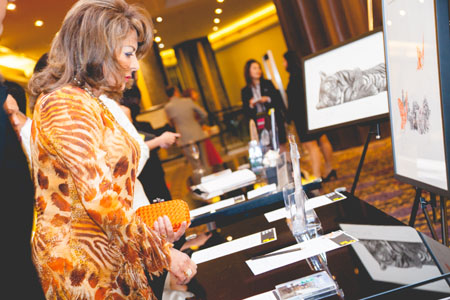 In attendance were some 95 passengers on-board Eastern & Oriental Tiger Express, enroute their journey from Singapore to Thailand. The exclusive voyage was part of the “Inspire” series of events organised by Save Wild Tigers, which included the Crystal Tigress display, The Majestic Tiger Ball and an exclusive, tiger-themed art exhibition in the UNESCO heritage city of Penang. Professor Datuk (Dr) Jimmy Choo served as Fashion Patron for the colourful affair, while TV fashion personality Gok Wan from the UK and actress Jaime Winstone were also present among other prominent guests.

Simon Clinton, founder of Save Wild Tigers, said “Globally there are just 3,000 [wild tigers] left in the world, 300 of those in Malaysia. To highlight the plight of the wild tiger in its home is ideal and we can’t thank YTL Hotels enough for their kind support.”

Funds collected from efforts at The Majestic Tiger Ball will go towards tiger conservation programmes, including that of Wildlife Conservation Society of Malaysia, which carries out work in Johor and Pahang.

For more information on Save Wild Tigers, please visit http://www.savewildtigers.org.

About The Majestic Hotel Kuala Lumpur
The Majestic Hotel Kuala Lumpur opened its doors in December 2012 and includes the meticulously restored iconic Hotel Majestic building. Built in 1932, the original hotel became one of the great landmarks of Kuala Lumpur in its time. Located minutes away from KL Sentral, the Hotel features 300 luxurious rooms and suites. The Majestic Wing houses the Suites with Butler Service, The Colonial Café, The Bar and The Tea Lounge while a new 15-storey Tower Wing houses the Deluxe Rooms and Suites, Contango Restaurant, 16 meeting rooms, a pillar less ballroom seating 1,200 people, a gymnasium and a swimming pool. Other facilities include The Majestic Spa and The Smoke House.

The Majestic Hotel Kuala Lumpur is Kuala Lumpur’s only member of The Leading Hotels of The World’s family of iconic and legendary hotels. For more information and reservations, visit www.majestickl.com.

The group also co-owns the Eastern & Oriental Express luxury train. In 2012, the company added Gaya Island Resort - a luxury resort on the exotic tropical island of Borneo, and The Majestic Hotel Kuala Lumpur - the second heritage jewel in the group’s Classic Hotels collection to the fold. In February 2014, the group revealed its fully refreshed Vistana Hotels. In July 2014, the group announced Kasara, its new brand of luxury accommodations offering bespoke, one-of-a-kind experiences in exotic locations.

With each new experience that it presents, the company strives to embrace and highlight the natural essence of culture, character and tradition of its surroundings. YTL Hotels is the hospitality arm of YTL Corporation Berhad. Visit www.ytlhotels.com for more information.