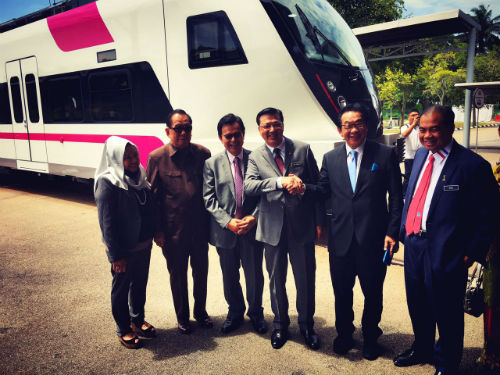 Dato' Sri Liow in his speech said, "The purchase of this new train set will only serve to enhance ERL's reputation for quality, comfort, and above all, safety and reliability, which has been its hallmark since it has begun operating in 2002.

The purchase of these new train-sets by ERL is indirectly a reflection of the Government's overall strategic plan to transform public transportation in Malaysia. Under the Urban Public Transport national Key Results Area (NKRA), the Government is undertaking several wide ranging initiatives to increase the public transport modal share in urban areas to forty per cent by 2030. These initiatives are multifaceted, including upgrading of existing infrastructure and provision of new services to address the needs of Malaysia's growing population."

When all the current and new rail projects in the country are complete, the travelling public will have easy and fast access to all parts of the city, Greater KL and the airport. The increased capacity and connectivity with the other rail systems will encourage modal shift from private vehicles, thus reducing congestion and improving public satisfaction and quality of life.

Dato' Sri Liow also said that ERL is a good example of the public-private partnership which plays an important role in contributing to Malaysia's economic development. He urged Government agencies such as the Ministries of Transport and Finance, SPAD, UKAS and the Economic Planning Unit of the Prime Minister's Department to continue to enable private enterprises such as ERL to match the nation's growing technical expertise to the increasingly sophisticated needs of the people.

During the unveiling ceremony, Tan Sri Mohd Nadzmi in his speech said, "As driving cars in Klang Valley has become an increasingly costlier way to commute, we expect more and more people will opt for public transport services to get them to work everyday, and to the airport when they need to catch a flight. The train service also fulfils the need for an efficient transportation system for those living and working in the townships along the ERL corridor."

"The quality of the new train-sets provides longer maintenance intervals with overhaul cycles extended by thirty per cent. This will translate to more capacity, less downtime and savings in the operating expenditure. With shorter isolation times and greater self-reliance, there will be reduced rescue requirement during service disruptions.

Meanwhile, Mr Lou Yanjun in his speech said, "When the agreement between ERL and CRRC Changchun was inked back in 2014, we were fully aware of the significance of this project. For this project, we used only the best - our best prject team members, implemented the most up-to-date design and procured components only from first rated suppliers to ensure the design; manufacture and testing of the Electric Multiple Unit (EMU) comply with the most stringent quality standards."

ERL purchased six new trains from CRRC Changchun; two assigned to KLIA Ekspres and four to KLIA Transit. The six train-sets will increase the frequency of the train operations and enhance service availability as well as cater to the growth in ridership for the next ten years.

The new train-sets are being delivered in phases and will begin operating in March 2017 after undergoing extensive testing and commissioning. Each new train-set has a better redundancy system with two compressors instead of one; more powerful traction; and additional sensors to increase safety standards.

ERL have carried a milestone 75 million passengers to date, and have maintained an impeccable 99.7% punctuality track record. The new additions to their fleet will allow ERL to further improve their service performance.